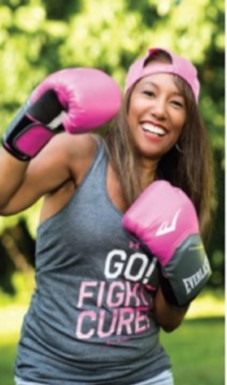 I am a gynecologist and I look at ultrasounds every day. So, when I looked over my shoulder during my screening breast ultrasound and noted an odd looking cyst, my heart said
there might be a problem. When I said to the sonographer, “that doesn’t look good,” and her response was: “please don’t talk,” I knew there was a problem. Five minutes later they
were doing a biopsy. It wasn’t until a week later, when I forced the pathologist to tell me the results, that I cried.

It is very strange to be a doctor and be sick. You know everything; you know nothing. You’re just as frightened as everyone else, with a twist: you know the statistics, possibilities, risks and options as soon as you hear the diagnosis – no internet search required. What you don’t know is the same as everyone else: what is going to happen to me? I remember the day I was told I had breast cancer like it was yesterday. I was reminded that 60% of African-American women have a  “triple negative” tumor. That means it is more aggressive and usually requires chemotherapy
– that dreaded word no one wants to hear.

The days before I would find out if I was one of the 60%, I walked around in a daze. I went into a cheap wig store and bawled. I cried so hard I scared the Korean woman trying to help me. The vanity aspect of losing my hair was only a small part of the tears. For some reason I never focused on dying – that wasn’t my fear. It was really knowing that the world would look at me and see me as sick. I wanted to be able to continue to do everything that I always do. I never want to be the helpless one. I have lived a blessed life and I didn’t want pity.

Fortunately, I would not need chemo. I put the cancer in my pile of “stuff to do,” taking it one day at a time. I was ER positive, so after surgery, I received hormonal therapy. As it turned out, I would not have had time to feel sorry for myself as one month later my father, my rock, died and a month after that my daughter became critically ill and I spent two weeks in the ICU with her. I refused to get overwhelmed. My cancer was not going to define me.

I take pride in is always making lemonade from lemons. My friends call it rationalization but I think we need to learn from the bad and create something good. My cancer made me a better doctor; but not because I know more about the disease. Now I can empathize with my patients and have a better understanding of the emotional roller coaster that comes with a scary diagnosis. I “get it” when you can’t hear what the doctors are saying because you are so afraid. I can only imagine how women (and men) without a medical background feel when doctors start speaking and you don’t understand what they are talking about.

About once a month I am the person who tells a woman she has breast cancer. It will never get easier but at least I know what it is like to be on the other side. Perhaps that was God’s plan for me all along.