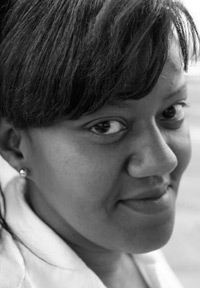 I always worked two jobs and was too busy to get regular check-ups for myself. Around the time when my seventh child turned one, I noticed a bruise on my right breast. I did not pay much attention to it because, while playing with the baby one day, he hit his head on my breast. I just thought it would go away soon. However, after four months went by, it still hadn’t gone away. It didn’t bother me physically, but mentally it tore me apart.

I work at the Jewish Home for the Aged and at the time Ms. Phyllis White was a resident there and I would always talk with her every day. One day she told me about the Sisters’ Journey support group for women who were survivors of breast cancer. I then began telling her about how I had a bruise that wouldn’t go away. She asked, “Have you ever had a mammogram?” I said, “No, I never had time.” She told me: “Now is the time.”

I continued to work for about one month more, and one day she said: “I’m going to make an appointment for you”. Of course I was scared but I went. When they said, “You have breast cancer”, I immediately thought I was going to die. I said, “Oh no, God, this can’t be happening to me. I have too many kids for this. How am I going to make it without a job?”

The doctors said the cancer was 12 centimeters big, the size of my whole breast; and when they did a biopsy, they estimated the cancer had already been there for five years. Immediately they started me on chemotherapy for four months in October 2008. Then I had a double mastectomy, by choice, with permanent implants in March of 2009. I had two more months of chemo, five weeks of radiation and one year of Avastin, which I just finished on July 19, 2010. Now I only take a pill, Tamoxifen, once a day for five years. I am now currently back at work and enjoying life and my kids to the fullest, by the Grace of God.

So if anyone thinks they can’t make it through, “you can”, one day at a time and think of me, Chrissy!