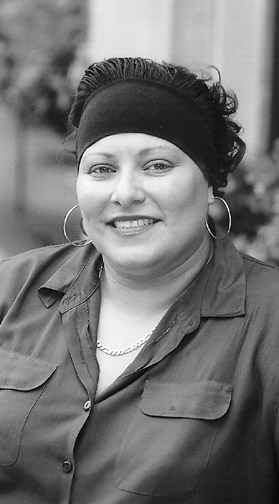 I am a 39 year old mother of two teenagers. I live in West Haven Connecticut. One night, I went to shower before going to bed. I remember seeing a show that spoke about breast examinations. How long had it been since I had checked myself?

I showered and checked myself. Was that a lump I felt? It seemed different from the rest of my breast, but I thought maybe it was just me. I checked myself as I laid down in bed, became concerned and made a mental note to speak to my doctor about it.

I had an examination with my primary physician. She did not seem too concerned about it. However, she suggested that I make an appointment with a gynecologist, and speak to her about having a mammogram. My appointment was sometime in late December of 2002. The doctor felt the lump and made an appointment for me to have my first mammogram. I went for my mammogram and they then did a sonogram. As they did the sonogram, The radiologist told me that I would need to make an appointment with a surgeon so that I could have a biopsy to determine whether or not the lump was malignant. My GYN doctor referred me to a surgeon. I made the appointment and prayed with all my heart that it would be o.k. I knew I had to tell my family. I never keep important things from my kids. I explained the procedure to them and, of course, they were extremely concerned.

I had my biopsy on the 28th of January 2003. I was instructed to see my doctor the very next day. I guess I was naive, at that moment, not to realize that was not a good sign. I went to the doctors and he told me that he did not have good news. He told me that the tumor was malignant. He proceeded to tell me my options, which I barely heard as all I could hear were the horrible sobs coming from my mouth. It took me a whole day to stop crying and, then, I pulled myself together.

I realized that I had to do what I had to do and I knew that God was going to help me through it. I had a mastectomy with reconstruction at the same time. This is a very long and lengthy procedure. Recovery takes about six weeks. My father and his wife came down and helped me for the first few weeks, With their support, the support of my children, David and Shaina, and my dear friends Zelphia, Marlene, Kathy, Carol, Pat, Isabel, to name just a few, I made it through the roughest of times. Chemo has been very hard on me. It has given me a terrible pain in my bones. I am almost through with a regimen of chemo. Now, I have to have radiation treatments for six weeks, but I am seeing a light at the end of the tunnel. If it were not for the peace that God has given me and the support from my family and friends, I do not believe I would have made it through this far.

I encourage all those who know of someone with cancer, or any illness, to be a support for them. At times such as these, a card or a call will make a world of difference.