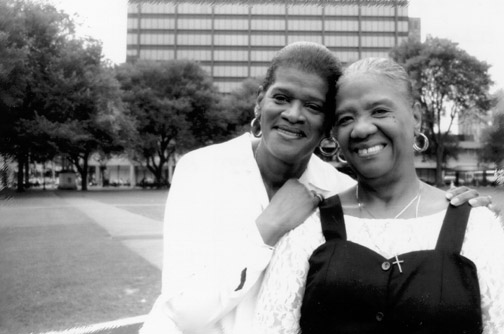 My name is Gloria Watson Hammie. I am a native of New Haven Connecticut. I am the wife of Charles L. Hammie for 42 years, a mother of two children and a proud grandmother to three grandchildren, Shanalee Hammie, age 13, and twins, Serena and Selena, ages seven. I work for Yale University Medical School.

In 1980, during a self-examination, I felt a lump in my breast. My first reaction was shock, anger, and fear. I thought this was the end because I lost my mother to cancer. I am very thankful to a friend and co-worker whom I told and she immediately called her surgeon and made an appointment for me. He told me it was a cyst. The cyst was malignant and had to be removed. A year later, another cyst was found and I underwent surgery for a second time.

During my hospitalization and recovery, I gave thanks to God, my wonderful family, and devoted friends, who were by my side day and night and offered their prayers, love and support. This was a source of comfort. My husband has endured and always helped me to have a positive out look on life. I did not need chemotherapy or radiation treatment. I am now a 24-year cancer free survivor!

My name is Rosemarie Watson Frambro. Everyone calls me “Rosie.” I also am a proud native of the great city of New Haven. I moved to New York City after high school, but before moving to New York, I was employed by the Southern New England Telephone Company. From there, I moved to Trenton, New Jersey after my marriage to William Frambro. I have been a widower for 23 years.

In December of 1995, I went for my annual mammogram. After the results of the first biopsy, the findings showed a malignancy. My sister, Vickie of New York City, suggested a second opinion at Sloane-Kettering Cancer Hospital or the Mount Siani Hospital’s Breast Center for Women. After all, I chose Mount Siani Hospital and that is where I had my surgery. I did not have to go through chemotherapy or radiation therapy. With wonderful family and friends and faith in God, I am a nine year survivor.

No words can ever express my feelings for my sister, Gloria. She was able to advise and comfort me. She told me, “True, a fighting spirit does not guarantee a cure, but it you are trying to overcome your anger, channel it into your fight for survival.”

As a nine year cancer survivor, I recommend that one self examines themselves and have a yearly mammogram. I thank God and I thank all of you who prayed for me and all the acts of kindness extended to me during my illness. I especially thank my husband, Clarence, my children, Janiqua, Jamar, and Jaquanna, my mother, sisters, brothers and church family for their unconditional love and prayers. My father instilled in us at an early age that “A family that prays together, stays together.” Thanks to all the doctors, nurses and receptionists who would not let me give up on myself, but continue to encourage me to think positively. I thank God for healing me. It is through His healing that I am able to walk among cancer survivors. To God be the glory for all that He has done.