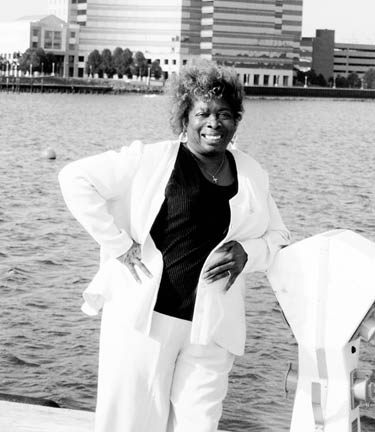 My name is Hattie “Maxine” McClam and I reside in Hamden, CT. On July 19, 1996, I went for my yearly mammogram. Everything seemed normal, but my breast was sore. I called my doctor. But, he said not to worry – sometimes women with large breasts develop soreness after a mammogram. He said to give it a few weeks and it should go away. However, it did not get better. It got worse.

About a month later, I called my doctor again and scheduled an appointment. It was then that I first noticed a lump. My doctor examined me, confirmed that there was indeed a lump, and immediately scheduled an appointment for me with a surgeon so that a biopsy could be performed. I did not want to believe that this was happening to me. The only person that I could share this with, at first, was my friend, Clarence. He was supportive and gave me the strength to face whatever was going to happen next.

The surgeon called me at my job and confirmed that I had breast cancer and scheduled an ultrasound. I then told my daughter what was going on and she insisted on going with me to the doctor. My daughter, Theodora, and our friend, Glennie, went with me to get the results of the ultrasound. The results showed a small lump. So, a lumpectomy was scheduled for three weeks from that day.

A few days before the surgery, my mother came up from South Carolina to be with me and to help me after the surgery was over. I really believed that everything would be okay because after all, it was a small lump. However, during the operation, the surgeon saw another lump, much larger than the first one, that was not detected on the ultrasound. He removed them both and removed several lymph nodes. But, the only way that he could be certain that he had gotten all of the cancer was to perform a mastectomy. I went home for just 24 hours. I developed complications and was rushed back to the hospital. They discovered that I had blood clots on the lung. A filter was put in to solve this new problem and the mastectomy was scheduled for the following week. With Clarence, my mother, my sister Mabel and my daughter at my side, the mastectomy was performed.

Once the blood clots cleared up, I had to undergo six months of chemotherapy. As I now look back on my experience, I was very fortunate to have my family and friends around me. Thank you, Clarence. You were my rock. To my mother and my sisters, Mabel and Barbara, and her friend, Jessie, thank you all for your love and support. Thank you, Uncle Peter, for all of your prayers and words of encouragement. A special thanks to Connie Donovan and all of the workers on the Oncology floor at Yale New Haven Hospital. I especially want to thank my daughter, Theordora, and Glennie; the two of you never left my side.

I have learned to live my life one day at a time. The real power is in prayer. So, keep on praying. I have been a breast cancer survivor for five years: It was a long journey, but I made it!