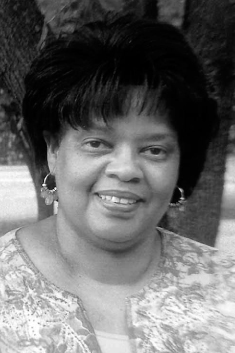 They overcame…by the Blood of the Lamb and by the word of the testimony. (Rev.12:12)

My name is Joan Santos Kelley. I am a native of New Haven, Connecticut and I am a Breast Cancer“Overcomer.” I am the youngest of 10 children to Daniel and Teresa Santos. I went to UCONN where I met my husband, Herb, to whom I was married for 30 years.

My journey started in February 2001. I went for my yearly mammogram. I have been doing so since 1993 when my sister Frances Jackson made her transition to heaven and met up with our mother and father after losing her battle to breast cancer. My oldest sister Rose Santos (who was in the 2004 calendar) was also diagnosed with breast cancer in 1999. My radiologist saw a shadow and asked me to return for a second examination. However, during the following week, I contracted pneumonia and forgot to schedule an appointment.

In September 2001 I began to feel pain in the left breast. I immediately called my radiologist and was urged to come in ASAP. I was referred to a surgeon for a biopsy when the x-ray revealed possible calcifications. The biopsy showed Ductile Carcinoma in Situ. The surgeon recommended that I undergo a lumpectomy and radiation therapy. He explained that if there were not clear margins, he would have to operate again to make sure all the cancer was gone.

I decided to get a second opinion and that surgeon suggested a mastectomy with a sentinel node biopsy which would show if there was any lymph node involvement. I decided to go with the mastectomy. Thank God there was no cancer in the lymph node involvement and the amount of cancer was less than .5cm or stage 0. Therefore, I did no have to undergo chemo or radiation. I thank God for my doctors and all the medical personnel that ministered to me during my journey. I thank Him for my late husband Herb, who went to every doctor’s appointment and procedure with me and also my daughter Arianna and son Herbie for their love and support during these difficult times.

I am also grateful to my brothers and sisters who loved me through my journey and all through my life, especially my sister Betty Lewis who came to Charlotte to be my “nurse maid”(she’s my second mother). Sisters, I believe it is really important to get your mammograms, do your self breast exam monthly and listen to your body.

We are not just survivors we are “OVERCOMERS.”