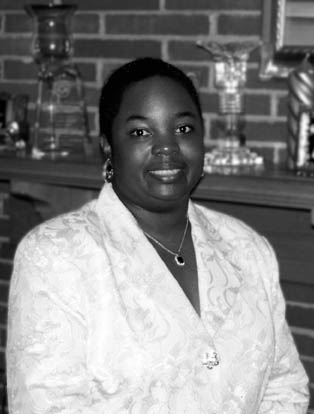 I am a resident of Hamden, Connecticut, although I am a New Haven native. I am a proud mother of one son, William J. Moore. My parents are James and Joan Turner. My siblings include my brother, James W. Turner, Jr., two sisters, Denise Brice and Michelle Turner, as well as three nephews and a niece. I am an 11-year veteran Police Officer in the city of New Haven. At age 37, I am also awaiting a precious gift – the birth of my first grandchild! My church home is Faith Center Church, Meriden, Connecticut, under Bishop Joseph and Lady Maddaline Norfleet.

On Saturday June 30, 2001, I was preparing to go to a conference when I discovered a large lump in my left breast while showering. This, I thought, was very strange. I didn’t notice it there the day before. Monday came and the investigation was launched to determine what it was. Ten days later, I had to have a mammogram and an ultrasound. The ultrasound showed not one, but three large lumps – two in the breast and one under the arm. The technicians advised that I see a surgeon.

Four days later, I met with a surgeon. He opted to do a biopsy right then and I submitted July 17, 2001. I received the call, one that would change my life forever. The diagnosis, cancer, in its third stage! I was devastated. What do you mean – I have cancer. Am I going to die?

On August 6, 2001, I began chemotherapy. I lost my hair after the first treatment and my body experienced tremendous pain and agony. Five months later, I had a radical mastectomy with reconstruction. Two weeks after surgery, I received radiation therapy, every day for six weeks.

This journey in the diagnosis of cancer was a test of my faith in God. Today, I live to say that I trust him even more now than I did before and I know him to be a healer. He healed my body. It is a life altering process to be diagnosed with cancer. But, God has promised me life and I believe him.

During my illness, members of the Police Department and friends were very instrumental in seeing that I had financial aid. I have been moved by so many acts of kindness and understanding, received first hand. I have experienced the effects a cancer diagnosis has on every aspect of one’s life. I am establishing an organization called “The C.H.A.I.N. Fund” (Compassionate Hands Assisting Interim Needs). This fund will provide financial aid for cancer patients, while they undergo strenuous treatments that prevent them from working. This usually results in their income being