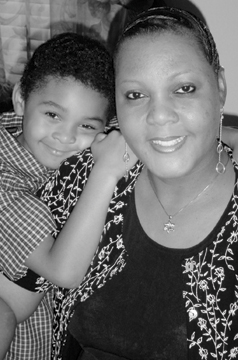 It was a hot August morning in 2002 when I was awaken by the barking of a dog (Peanut). This was my niece Christina’s dog which I was watching while she went off to college. Peanut would bark every morning around 4:00 a.m. to be taken out for a walk. On this particular morning I refused to take him out – I just didn’t feel like moving. So, I rolled over, glancing at the TV, which had a Breast Cancer program on. I said to myself, “I haven’t examined my breast in a while.” I started rubbing and examining my breast when suddenly I felt a lump! I jumped straight out of the bed, my heart beating 100 mph. This lump didn’t feel normal – it felt very hard and stiff. I went to my sister Keturah’s bedroom door to wake her because I was extremely frightened. I stood there when a peace came over me and said, “just call the doctor in the morning.” And I did.

My regular gynecologist (Dr. Thomas Allan) was away on vacation, so I saw one of his partners, Dr. Cohen. He examined me and right away asked: “Are you a heavy coffee drinker?” I was. He advised me to leave the coffee alone for a while. He referred me to Dr. Kenneth Kern, who is a breast specialist. His practice is Surgical Oncology. He did an ultrasound on my breast and saw this funny-looking thing shaped like a hook. While examining my breast he noted that I had a Mammogram eight months ago, which was negative.

While we chatted, he was doing the biopsy. He told me that he was going to send it off to the Pathologist and hopefully would have the results to me by Friday (it was Tuesday when the biopsy was done). I reached Dr. Kern shortly after 4:30 pm on Friday afternoon. He began by saying: “Well your test results were not exactly benign. Have you ever heard of a Lumpectomy?” I said “no.” He told me it was a procedure that would remove the lump, and that everything would be fine. He instructed me to come in Monday and bring a sister or a family member. (I brought five family members to my appointment!)

I was diagnosed (age 38) with Invasive Ductal Carcinoma Grade III. After receiving the devastating news I found myself sitting in the parking lot of my son Isaiah’s Daycare. I prayed asking GOD to give me the strength and the courage to face whatever it is that has been placed in front of me. After I rendered that prayer, I sprung out of my car, greeting everyone with a smile on my face. I took my child in my arms and gave him the biggest huge ever! I looked into his little 2-year-old eyes (he’s now six) and said to myself: “This is my strength, Isaiah Solomon. GOD blessed me to have you for a reason and I’m going to fight, fight, fight for you! Mommy is not going to leave you.”

I reflected back on my sister, Debra Loretta Smith-Rolando, who we recently lost (1999) to a rare form of Sarcoma cancer, a type which was very close to ovarian cancer. I refused to let this disease come and take another one of us. I got angry for a moment because I didn’t want to put my family through this again. I have a very close-knit religious family. As soon as they all heard the news, the calls started pouring in. Prayers started Going Up. Every last one of those prayers was answered, and I thank the Almighty God for answering my prayers.

In the midst of all of this I placed a call to a man (Rabbi Jehu August Crowdy Jr., G.F.A.). He blessed my Journey and told me to “Be Concerned but… don’t worry … everything is going to be alright.” After he uttered those words to me my soul was satisfied. He was there with me from the beginning to the end. He never left my side.

I participated in a Cancer Research Clinical Trail. The reason why I elected to participate was because I had an overactive gene called HER2. This gene produces a substance called HER2 growth factor receptor which is known to make cancer grow faster. I underwent Chemo every three weeks, Herceptin weekly for one year and radiation everyday for six weeks. The drug Herceptin was part of the Cancer Research Clinical Trail. In recent studies it has showed to have a 50/50 reoccurrence ratio. I feel privileged to have been a part of the Clinical Trail and I encourage us African-American Woman to become more aware of the Clinical Trails and what they have to offer.

I thank GOD for my son, my church, my family & friends, and most of all I thank my mother, Esther Uneeda Parker-Smith, for doing such a profound job in raising a family that prays together and stays together. I thank both my parents for grounding me and keeping me in the “Will of God.” This has helped make me who I am today, so lets Journey on with “Sisters’ Journey.”

I give thanks to the founder of Sisters’ Journey for creating an environment of awareness of our bodies our minds and spirits. GOD has a way of getting your attention even through his four legged creatures. Without “Peanut” barking, I wouldn’t have awakened to see the Breast Cancer Awareness program. Would I still be here today?

Peace Be Unto Thee.