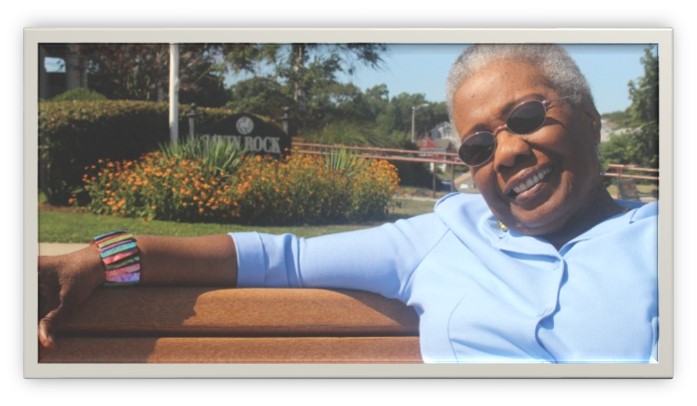 In 2012 I had both the best and the worst experiences of my life. The best, and happiest, was in April when as a surprise for my 80th birthday, my son and daughter flew in from the Caribbean for a celebration weekend.

The worst, and most stressful, was in January when two masses were discovered in my right breast.

This was not my first experience with cancer. In 1998 when I lived in Flushing, New York, I was diagnosed with Stage 3B cervical cancer and was treated with surgery, radiation and chemotherapy followed by a hysterectomy. I considered myself lucky that day when my surgeon in Flushing recognized my surname. He had gone to college and had worked in a hospital in Trinidad with my son.

When I moved to Connecticut in 1999, I worked for three years as a seamstress at Costume Bazaar in New Haven. After suffering severe back and hip pain, I had a right hip replacement. Eight days later, while still in rehab, I suffered a bone fracture requiring emergency surgery. Today I walk with a cane to avoid falling.

Last October, I decided to take the train to New York, followed by a subway ride to Queens, to visit a friend. The next morning, I awoke with a pain in my outer breast. I thought it was a strained muscle from going up and down the subway stairs. Fortunately, I already had an appointment scheduled with my og/gyn doctor for a follow-up visit. Instead of seeing my regular doctor, who is a male, I saw a female doctor, and I told her about the breast pain. She immediately sent me for a mammogram.

After two mammograms and two ultrasounds, I met Dr. Anees Chagpar, Director of the Breast Center at Smilow Cancer Hospital. Dr. Chagpar told me that there were two masses in the outer side of my right breast. And the miracle journey started from there!

You don’t know how many people are in the same condition until you are in it and hear about their experiences. I was scared and wondering what mine would be like.

I rely deeply on my Buddhist faith. Buddhism is not a religion, but a philosophy of life that promotes world peace through individual happiness. Once you chant Nam Myoho Renge Kyo with strong faith, you can win by overcoming troubles and difficulties. My members and friends continuously chanted with me and were very supportive. Though I had some fear, I believed deep down in my heart that I could beat this cancer. My motto is: “I shall not be defeated.”

I met with Dr. Chagpar again to discuss my options. On Dr. Chagpar’s advice I had a lumpectomy in February. The pathology report showed that the margins were not clean. (Margin is a term used to describe whether there are cancer cells right at the edge of the tissue that has been removed.) A second operation showed cancer cells still remained. So in April, two weeks after my joyous 80th birthday celebration, I had a mastectomy. The surgery was a success. I continue my cancer treatment, taking a chemo-preventive pill once a day. Despite the fact that I continue to have daily pain from the hip surgery, my attitude is upbeat.

Dr. Chagpar was the best thing that happened to me. I went to the right person in the right place at the right time. She is so kind, and speaks so softly that she captures your heart and puts all your fears to rest. I was really scared but just being in the environment of the Breast Center and feeling the atmosphere of the people there made me comfortable. The place is so calming and people are so kind and respectful. They showed me love. Even to this day, I enjoy going there. But I couldn’t have survived without having a strong in my Buddhist practice.

My mission is to be an inspiration to my family, my members and the whole universe. Even though we don’t always win, we don’t have to lose. That means we must not give up. We shall not be defeated. We have to keep fighting.

That is the story of my life as a two-time cancer survivor.