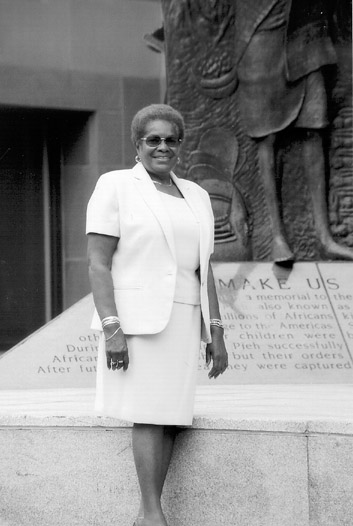 My name is Mildred Louise-Stevenson and I am a native of Norfolk, Virginia. I am the second child of three children. I moved to Connecticut in April 1960 and now live in Hamden.

In February 1998, during my annual mammogram, the technician took several pictures of my right breast. A few days later the nurse at my gynecologist’s office said the doctor would like to see me.

My gynecologist gave me the names of three good surgeons. I chose the best one for me and made an appointment at Yale New Haven Hospital to get a biopsy. The day I went for the biopsy, my husband (Leonard Stevenson) and my sister (Geraldine Gause) stayed with me through the entire procedure. Two days later my surgeon told me that I had a lump in my right breast. I went home and told my husband, my son, Mitchell, Sr., my daughter Michele and my two sisters. We were all very sad, but we knew that with the grace of God, we would get through this together.

On March 10, 1998, I had a lumpectomy on my right breast and 13 lymph nodes were removed from under my right arm. The 13 lymph nodes were not cancerous (Thank God!) Once I healed from the surgery, I went to the Father Michael J. McGivney Center for Cancer Care. I was given radiation therapy for six weeks. After the fifth week of treatment, I had to stop for a few days because my skin could not take the radiation. We gave my skin a few days to rest and then continued the radiation for the last week. A few weeks later I was put on tamoxifen for the next five years. In June of 2003, I was taken off the tamoxifen. I go for a mammogram once a year.

I would like to say to all women: Get checked annually! With the grace of God, I am a breast cancer survivor.