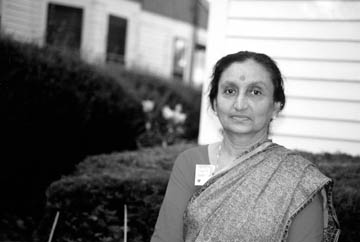 I am 65 years old and I am married to K.P. Nair for 43 years. We have one son, “Kailas”, and two daughters, Renu and Hema. I have a Master’s degree in economics from the Kevala University, South India.

It was the last week of November 1995. I was in New Delhi, Capitol of India. I noticed a lump on my right breast, which was found to be malignant.

Without wasting time, within three weeks, i.e. December 19th, 1995, a radical mastectomy was done by Dr. R. K. Sharma. It was at the G. M. Modi Hospital, New Delhi, where he removed my right breast and lymph nodes. I was discharged from the hospital on Christmas Day and put on chemotherapy (CMF) for six months and on Tamoxifin for five years, ending in December, 2000. But no radiation!

Thank God. Early detection of cancer and surgery have saved my life. Since then, along with my husband, I have visited my son, Kailas, in Yale University, New Haven in May/June 2000 and in August/September 2001. On August 23rd, 2001, I had the opportunity to meet Ms. Linda White Epps, at the Presentations Ceremony of the “Daily Points of Light Award” to her. I was a guest of Dr. Iona Black. I take this opportunity to congratulate Ms. Epps for her selfless services to humanity.