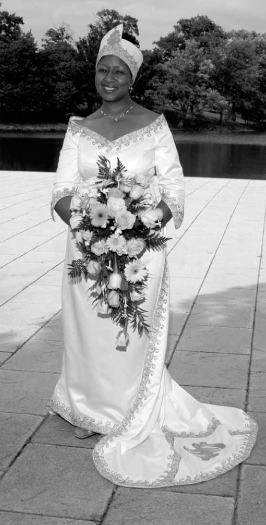 In September 2000, I was 33 years old and happily living and working as an educator in Benin, West Africa, truly fulfilling my life’s calling. One morning while getting dressed, I felt a lump in my right breast. I remember calling my mother back in the U.S. and telling her. She told me she wasn’t worried, but of course we decided that it would be checked out during my leave, scheduled for October.

Later that month, I kissed my adopted kids goodbye and told my colleagues and friends I would see them in a month. I headed home to New York for what was supposed to be a month-long vacation. Shortly after I arrived in Buffalo, I had my first mammogram. Afterwards, the radiologist called my father (who had accompanied me) into his office and told us that he didn’t have good news. The essence of  his message was that my right breast was full of cancer.

I was overwhelmed as I contemplated the implications of this news. My life on the other side of the ocean was literally waiting for me to return, but I wouldn’t be able to do so. On November 27 – the day I was scheduled to return to Benin – my parents and I received theformal diagnosis from my gifted and compassionate surgical oncologist, Dr. Thelma Hurd: stage 2B carcinoma. This devastating diagnosis marked the beginning of a life-changing physical, emotional and spiritual odyssey for our entire family. We were shocked because there was no significant history of breast cancer in our family, and I was so young.

In December, I had a mastectomy followed by immediate breast reconstruction using tissue from my abdomen – a 12-hour-long operation. For the next 10 months, I underwent very aggressive treatment. This is because cancer in younger women tends to be more aggressive. In addition, four of my 13 lymph nodes were found to be cancerous. After the six- week recovery from the surgery, I had chemotherapy – eight sessions over a six-month period. I participated in a clinical trial for this portion of my treatment, which I strongly urge others to do. Six weeks of radiation followed chemotherapy, and I began the five year regimen of Tamoxifen, an estrogen-blocker, since my cancer was estrogen-receptive. Throughout this period, I was literally carried on wings of prayer by a host of friends, family, church members and colleagues and, of course, my beloved Benin. When I couldn’t pray, the prayers of those who loved me got me through; my angel was my mother Sybrnee Thompson. Had it not been for her and the Lord, where would I be today? In June of 2002 I finally returned to Benin to pack up the fragmented pieces of the life I had left behind a full19 months ago.

Lastly, in November of 2004, I met my life partner, Marc. We were married by my father in August 2005. Our marriage has truly been the greatest blessing in my life since my diagnosis. In May I ended my tamoxifen regimen three months early in order to prepare for the next chapter in our lives – pregnancy and parenthood. There is indeed abundant life after breast cancer. To God be the Glory