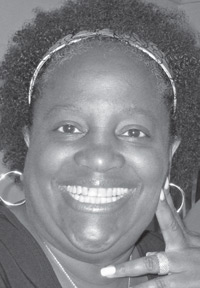 My name is Valerie Lee and I was diagnosed with breast cancer on December 28, 1998 at the age of 36. I had surgery on January 4, 1999 to remove my tumor followed by six months of chemotherapy and radiation. July 2008 marked nine years since my last treatment of chemo. While some women moan and groan about turning 40 years old, I was not one of them! I now look forward to each and every birthday!

In my teens I had been diagnosed with Fibrocystic Breast Disease, which is described as common, benign changes in the breast. At the ages of 15 and 19 I had benign tumors removed and was cautioned to watch any new growths.

At 26 I discovered another lump and had a mammogram, which determined the lump was non-cancerous so I opted not to have it removed. Having had two surgeries by the age of 19 I was not eager to go under the knife again.

At the age of 36 my lump changed and I went to a surgeon and had a biopsy performed. The doctor called me early in the morning and told me I had breast cancer. I can truthfully say I was not shaken to the core. In January 1999 I had the tumor removed along with a handful of lymph nodes which turned out to have cancer in them. The day of my surgery, January 4, 1999 became my Re-birthday, so lucky for me,

I now have two birthday celebrations.

I was blessed with a great healing team, which consisted of my Oncologist Isidore Tepler, the nursing staff and Radiology department of The Bennett Cancer Center of Stamford Hospital in Stamford, Connecticut, along with my family, friends and co-workers who offered support and prayers during my treatment. I made everyone a part of the process by requesting positive words from each person that I put in a 3-ring binder and took to each treatment. I would read the words and prayers and feel energized by them. I referred to my treatment as a Healing; it was and continues to be to this day.

I take Arimidex every day and feel blessed to live in a time when a pill is all I need. Life is good and getting better each day. I take my pill, do monthly self-exams, and get a yearly mammogram and sonogram on both breasts. I also share my story whenever I can.

Live, Love and Laugh! It is all Good!