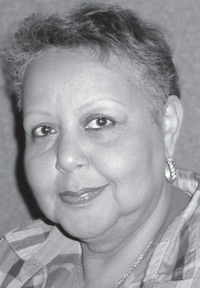 In the year 2005 during my summer vacation I found a lump between my right breast and arm pit. I thought it was a cyst, being that I’m a diabetic and it is common to have cysts under your arm pit. I have seen it before in my family members.

As soon as I returned home I saw my doctor, he referred me to three surgeons. I selected the only female in the group which made me comfortable. She explained to me that there would be a possibility of a positive diagnosis she then proceeded to perform a biopsy. The day after she called me and told me I had breast cancer, stage three. At that moment my world stopped but I knew that even though the diagnosis was threatening, I was going to beat it I never had any doubt about it.

My surgeon an oncologist told me about a new treatment. In October of 2005 I started my first treatment. The chemotherapy took all day long from 8:30 a.m. until 3:30 p.m.. My caretaker (Nurse Karen) explained to me every step of my treatment and possible side effects. I started investigating on my own. My caretaker was so compassionate and understanding with me and with all the other patients whom she cares for. Because of that, I started talking about my experiences and feelings freely. I felt scared and expressing my feeling was my way of conquering that fear.

On the first chemo treatment I had a reaction and I had to stay in the hospital for five days but I was optimistic. I always had the support of my family and friends. When I was able to work we had Circulo de Oración (Circle of Prayer) at the school where I worked. In March my chemo finished, I had a lumpectomy. Two days after my surgery, my father had surgery and was in the ICU and passed away. During my surgery I had a drainage tube inserted that I had to disconnect to be able to travel to Puerto Rico for my father’s wake.

In May I started my radiation and it was so severe that I wasn’t able to put clothes on. At that point I asked for a leave of absence until the end of the school year. I was weak and tired most of the time, but never depressed. Some people looked at me with pity and others were compassionate, but I grew strong – in body and spirit. “El Senor escribe derecho en líneas torcidas” (The Lord writes straight on twisted lines) just to remind us how much he loves us and that any suffering we endure is only one in a 1,000,000 of how he suffered for us.

I have been in remission for almost two healthy years and somewhere there is a fear that it will reoccur. But I know I will be prepared to fight it again. Today is the first day of the rest of my life. My name is Vilma E Nieves and I am a Breast Cancer Survivor!