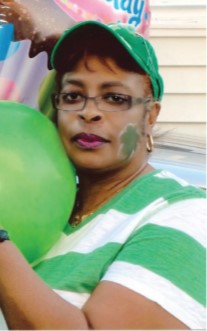 of one adult daughter, Ms Angela R. Dease, whom I call “Angie.”

In April 2013, after a routine mammogram at Yale New Haven Saint Raphael Campus, I was called back to repeat my mammogram. I was told that a spot had been found on my eft breast. A week later I had a biopsy. My doctor, Dr. MaryBeth Gillette confirmed that I had breast cancer. I was very depressed and overwhelmed with fear. Dr. Gillette
immediately scheduled an appointment for me at Smilow Cancer Hospital where I met with Dr. Donald Lannin, who confirmed that I had stage one breast cancer in my left breast.

On April 23, 2013, Dr. Lannin performed my surgery, which was a partial mastectomy, and also removed three of my lymph nodes. I received 33 treatments of radiation. Sometimes the treatments made me feel ill. Halfway through treatment I wanted to give up; but because of the encouragement I received from Dr. Susan A. Higgins and her staff, my daughter Angie, and my friend Mrs Rebecca Hamilton, I was able to continue treatment. To them I say, “Thank you.”

A special thank you to a little boy named William who was about age seven and also in treatment. I watched this little boy go through both radiation and chemotherapy. William always had a smile and a hug for me. On William’s last day of treatment we all celebrated with him. I gave William a Guardian Angel pin to wear on his shoulder and thanked him for all the smiles and hugs he
gave me. William was my guardian angel. He was my hero. William, I will never forget you.

Thank you Doctors MaryBeth Gillette, Donald Lannin, and Gina Chung. I also thank the staff at Smilow Cancer Hospital and all those who kept me in their prayers.

“I will lift up mine eyes unto the hills, from whence
cometh my help. My help cometh from the Lord,
which made heaven and earth.“

Thank you and God Bless.
Virginia A. Hodges