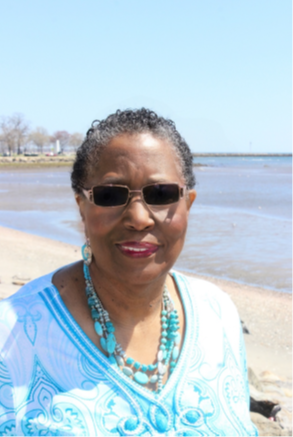 I am Marion E. Harmon. I was born in Somers Point, NJ but was raised and lived in Bridgeport, CT all my life. In 1997, at age 47, I had a mammogram and was diagnosed with DCIS breast cancer. I also went into menopause at age 47. I did not have a lump. I am now a 25-year survivor.

I had not had a mammogram for a couple of years because my insurance did not cover the cost fully. After I changed insurance and had coverage, I made an appointment to have it done. I scheduled the appointment in late 1996 for February 1997. I thought about cancelling the appointment, because my 25-year-old godson had an aneurysm and had been in the hospital on life support in Virginia since a few days before Christmas. We made an emergency trip to Virginia when it first happened to see him and be there for his grandmother, who had raised him since he was 10.  It was during that time that my best girlfriend passed away. So, when we went down, we needed to come right back. We planned to go again in February on the weekend of Presidents’ Day since we would have that Monday off work. By that time my godson was off life support and doing better. I was undecided about going because of my mammogram appointment.

One day I was walking upstairs in my house and I got the sense that I needed to keep the appointment. I now believe it was God through the Holy Spirit. So, I did not go back to Virginia. My godson made a full recovery and is doing well today.

After I had the mammogram, I was at work when I got a call from my doctor’s office. He told me that they had seen something on the mammogram and I needed to see a surgeon right away. I was stunned and became a little excited. I said, “Who should I get?” I did not know a surgeon. He said there was a new breast surgeon around, Dr. Leslie Wagenberg, but I could go to Columbia Presbyterian in New York. He said that if I was his relative that is where he would recommend to go. In my situation, with limited transportation, I said no. I was not going to New York and tried to process what I had been told.

My coworker MaryAnn Harp was sitting at her desk across from me and she overheard everything I said. When I hung up the phone, I began to tell her what had happened. She is also a breast cancer survivor and she began to talk to me and calm me down – one day at a time, one thing at a time.

Next step was to see Dr. Wagenberg. She explained the diagnosis and everything to me in detail so I could understand. I did not have a lump, but I did have micro-calcifications. They were just there, not aggressive. The cancer was classified as Stage 0 (zero), DCIS (in the ducts, not invasive). She suggested a lumpectomy with radiation – five days a week for six weeks. I experienced skin breakdown and had to stop for a few days. I was able to go on our family reunion in Atlanta GA and I worked most of the time until my skin began to break down, which was a little painful.

During this time of my Journey, I had the love, prayers and support of my family, church, coworkers, friends and Dr. Wagenberg. My spiritual mentor, Mother, the late Rev. Barbara Spratley, told me to stand on God’s word with a particular scripture. My scripture was from Psalm 103:1-5, focusing on verse 3: “…and heals ALL your diseases.” My sons were very supportive. My oldest, Derrick, was always available if I needed him – whether it was something from the store, a ride here or there – and my youngest son Darryll,, the same and treated me to getting my hair styled every two weeks. When you look better, you feel better.

I was doing well, one day at a time, when in 1999 something showed up on the mammogram. I had another lumpectomy. The results were sent to the Army Medical Team in Maryland for a second opinion. No cancer, but I was put on Tamoxifen for five years. I had  side effects from the Tamoxifen. In 2001, I was diagnosed with endometriosis and had a total hysterectomy; and in 2003, I was diagnosed with pulmonary emboli (more than one blood clot). But GOD brought me through both. The Tamoxifen was stopped after 4½ years.

I have continued with my regular yearly mammograms and over the years I supported and worked with the Witness Project, along with Jean Austin, MaryAnn Harp and then Marilyn Moore. It has now been 25 years since my 1997 diagnosis and 23 since 1999. I AM GRATEFUL!!! To God be ALL the Glory, for HE is Great and Greatly To Be Praised!