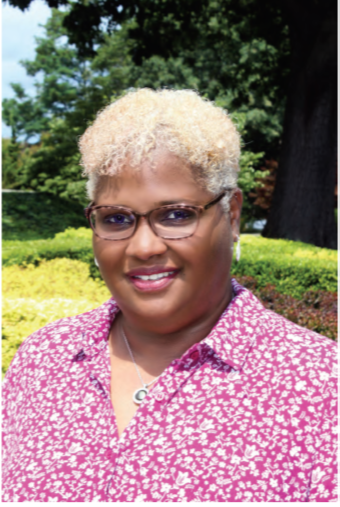 physician told me that because I had family members with breast cancer, I should be checked early. My grandmother’s sister and her two daughters all had breast cancer. They lived next to me growing up. I never got around to being checked.

At 45 I had a lot on my plate. I was a divorced mother of three. I also was in a battle with my town, Olin, and the DEP over my neighborhood cleanup. It had been a dumping ground for Winchester Repeating Arms back in the day and then it was filled in and homes were built on
it. The yard that my cousins and I grew up on had three times the legal limit for lead, arsenic and other carcinogens. We never knew it until the state told us there was a problem.

In March 2012, I came home from work and decided to change into more comfortable clothes. I was feeling very tired lately and just wanted to lie down. When I removed my bra, I felt a lump. I went to see my primary doctor who sent me for an ultrasound-guided biopsy.
While waiting for those results my underarm swelled up and became very painful. I was sent for another biopsy, this time of my underarm. The lump there was bigger than in my breast. They both came back positive for Left Breast Infiltrating (Invasive) Ductal Carcinoma,
Nuclear Grade 3, Stage IIA, Hormone Receptor ER and PR Positive 95%, HER 2, 0 Negative.

If you are 45 or younger, they send you for genetic testing to see if it runs in the family. Mine was not genetic, but environmental! I’m not saying it was caused by my neighborhood, but it’s a possibility.

I received three months of chemotherapy, then surgery (left breast radical mastectomy, a right breast simple mastectomy, and a DIEP flap.) Recovery was not easy. I suffered many infections and had problems with both my blood pressure and glucose level. After surgery
and recovery from my infections, I had weeks of radiation and developed another infection after that.

I had many angels that helped me during this time. My mom, who helped take care of my every need; my children, who were very understanding and did whatever they could to help; my 21-year-old daughter at the time had to give me daily injections when we had 40 inches of snow and no one could get to us; my brother Brian, who took me to all my appointments and even shaved his head when I lost my hair and refused to grow it back until mine came in; and many family members and friends who cooked food, donated time and money, and brought things for my new house when I was forced to move in the middle of chemo.