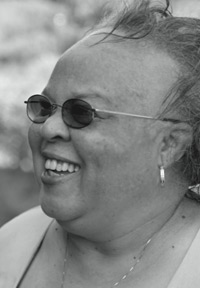 I still carry the paper in my purse that Doctor Graham, my surgeon, gave me after checking my mammogram and examining me.

My story began in December 2000, when I received a letter concerning my mammogram not looking right and asking if I could come in for another mammogram. It was almost around the holidays, so I decided to wait until after the holidays. I talked to a friend and he told me to go now and get the mammogram. But I was thinking of my family in the back of my mind. Not wanting to ruin anyone’s holiday, I felt I could do this by myself and went in for my mammogram. When I was shown the x-ray, I thought it looked like dried up milk. I was scheduled for a biopsy and was still thinking that I could do this by myself. When I was given the results later and was told that I had breast cancer, I made it to the elevator and broke down crying. God has a way of bringing you down on your knees and calling on Him. I couldn’t go any further. I had worked in hospitals around cancer patients and the end was always the same. I called my sister from the pay

phone and she said, “Get into your car and I’ll meet you at home.”

Family is one of the most important things in my life. I told my sister that I didn’t want any treatment; let the cancer just run its course. She got the phone and called my mother and children. I refused to talk to anyone because I knew what they would say, wanting me to survive this cancer. That night I was surrounded by family.

After seeing Dr. Andrew Graham, I also made an appointment at the Father Michael J. McGivney Center for cancer at Saint Raphael’s Hospital. My oncologist was Dr. Andrea Silber. My first visit was a family affair. My father had Lung Cancer and when he went through his treatments, both chemotherapy and radiation at the same time, he didn’t get sick. When I started, I asked God to give me the strength and courage that my father had. I went through chemotherapy, surgery, and then radiation. Every step of the way my family was there. My appetite was very bad. My sister was always bringing me lunch – she would get this homemade chicken soup which was very, very, very good.

I didn’t get sick while going through my treatments, knowing God didn’t bring me this far to leave me. He had some work for me to do. In November 2004, my gynecologist found ovarian cancer while I was in surgery for a simply hysterectomy. I had to have a stronger dose of chemotherapy. My family was still with me and I was very sick this time. God was still with me, telling me that everything was going to be alright. I still had work that God wanted me to do.

Not everyone has a lump that you can feel in your breast – I didn’t. Please have your yearly mammogram and doctor’s appointment. Your body tells you when something is not right.

I would like to thank Dr. Andrew Graham, Dr. Andrea Silber (you have the heart of an angel; you care about your patients), Dr. Joyce Jung (radiation doctor) and the nurses that put up with me. I would also like to thank my entire family and my church, Christian Tabernacle Baptist Church for their love and support – God bless each and every one of you!