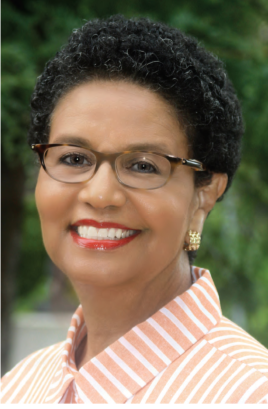 a healthy, happy, 66- year-old retiree, eagerly looking forward to fun-filled golden years. Given those favorable statistics and my naturally upbeat outlook, I never had any reason to think that I would be one of eight women diagnosed with breast cancer, but fate intervened.

On a sunny afternoon in May 2018, I went to the same facility I had been going to for years to get my annual mammogram. I fully expected to get the same letter printed on pink paper, advising me all was well and to schedule an appointment for next year’s
mammogram at my earliest convenience. The expected letter never arrived. Instead, I received a call, requesting that I go to a different facility for a more detailed screening. I was only slightly concerned at receiving this request, and simply thought the radiologist was being extra thorough by perhaps taking advantage of more up-to-date equipment in the newer facility. I scheduled the appointment for a few weeks later, and mentioned it to a friend over dinner. As good friends often do, she offered an assuring observation that if the radiologist
thought my situation was dire, there would have been an insistence that I come in immediately for testing. I agreed that her view was valid and never gave the upcoming appointment another thought.

When I arrived for my appointment in early June, I noticed it was different than previous ones due to the length. First, I took what felt like an endless number of 3D mammograms. Next, I went to another part of the facility for an ultrasound. I remember the technician explaining that she was encountering some difficulty in getting the right view for an accurate report. When she finally finished, we both breathed sighs of relief and laughed a bit. I dressed and waited to meet with a physician who would inform me of the test findings.

Within 10 minutes, a woman introduced herself as the doctor who reviewed my tests.  She spared no time with pleasantries, simply stating “there is something there that wasn’t there last year.” She explained that the next step in this process was to have a biopsy of the area, and that I shouldn’t be surprised if a surgeon was at the appointment. The doctor’s ending statement stunned me. I quickly asked her, “Do I have cancer?” She responded that the biopsy would provide that answer.  Before I left the facility, I met with a receptionist who arranged the biopsy appointment for a few weeks later, gave me a folder with a large amount of material enclosed inside, and wished me well as I left the small room. As I drove from the facility, I was unsettled, but hopeful that the biopsy would reveal benign results.

Later that day, I called to schedule an appointment with a friend who has been my gynecologist for a number of years. I wanted to obtain her view on my current condition. Fortunately, I was able to meet with her the following day. She pointed out it was crucial not to delay getting the biopsy. She quickly placed a call to a personal friend of hers who is a radiologist. Two days later, I was in her friend’s office. My dear gynecologist friend arrived unannounced at the appointment to simply hold my hand and provide me with calming support. The
following afternoon, I received a call that shocked me to my core. I had Stage 3 breast cancer. I recall thinking I had just been delivered a death sentence.

From that point forward, I was contacted by numerous medical personnel whom I had never heard of before. My daily routine was filled with doctor visits and calls, pills, hospitalization for a partial mastectomy, chemotherapy, daily radiation and finally… restoration to robust health!

Absolutely key and critical to my wellness journey was my wonderful sorority sisters and friends who drove and sat with me during long infusion appointments, prepared or brought nourishing meals, picked up medication, took detailed notes during doctor appointments, called me daily to check in, stopped by for “wellness checks,” sent cards/flowers/gifts, and prayed for me. I was placed on church prayer lists, rosaries were prayed, and sister-circle prayer groups added me to their intercessions. I was wrapped in HIS healing grace and the grace-filled goodness of my precious sisters and friends. Now onward to richly enjoy my golden years!