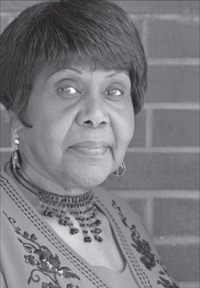 My name is Cittie Thigpen Beck. I was born February 9, 1940 in New Haven, Connecticut. My parents were Charles and Louvenia Thigpen. My parents moved to New Haven with my uncle Willie

Blount from Greenville, N.C. to start a church. This church was where the old St. Mathews Church used to be on Webster Street.

Everyone hears the word cancer one time or another. One doesn’t realize how this disease can affect your life. An excruciating pain in my right breast began in April of 2006. This pain caused me to stop talking on the phone and make an appointment with Dr. R. Cassin. At this appointment I had an ultrasound. A week later, Dr. Cassin made an appointment for me with Dr. Kay Zuckmen, a breast cancer specialist. After a biopsy, I was given the news. I told her if my breast had to be removed, that was fine with me. The biopsy report revealed cancer cells were in my lymph nodes. We decided on chemotherapy and radiation for treatment instead of a mastectomy.

Before treatment began, I was uncertain. I felt like giving up. My husband convinced me to follow the path the doctors had laid out for me because I was very sick. I prayed the prayer of faith. My good friends did not forget me. Rev. Helena Tyson from Texas called me twice a day for months. Sometimes I felt so bad I could not talk much but I continued to pray and ask God to give me more time.

Chemotherapy and radiation treatment has made me cancer free for the last two years. I have found that the old saying, “You have to go through it to get through it” to be so true. I know it was God, the doctors and nurses, my family and friends who helped me through this troubled time. Because of the treatment, my breast was not removed.

I love to volunteer to work with the children in my church and the elderly.