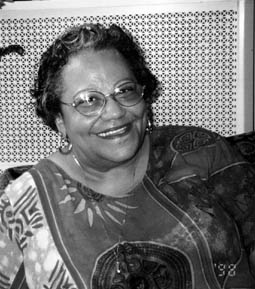 I am a native of Bronx, New York. I moved to New Haven, Connecticut in 1954 with my husband, Giggy, and our two daughters, Stephanie and Celeste. Two more children were born in New Haven – a daughter, Loreen and a son, Giggy.

In March 1992, I went for my annual mammogram. A small mass was discovered in my right breast. Neither the surgeon nor I could feel any lump. He did a biopsy and it was malignant. My doctors said I did not need a mastectomy. A lumpectomy was done on April 30, 1992. More than half of the lymph nodes were also removed from under my arm. I had twelve chemo treatments (twice a month for six months) and eight weeks of radiation. Four years ago, in July 1998, my right arm began to swell due to lymphedemia. I now wear an elastic sleeve and receive Lymphatic Drainage Therapy once a month.

In March 2001, cancer was discovered in my uterus and I had to have surgery. But, thank God, it did not get into the walls so I did not need chemotherapy or radiation treatment.

My faith in God, my wonderful family and friends and a positive attitude help sustain me. Thankfully, I was never ill as a result of my chemotherapy and radiation treatment and God blessed me with doctors who were knowledgeable and reliable.

My motto in life, and my mother’s declaration to us growing up was: “By his stripes, I am healed.” I know that I can do all things through Christ Jesus who strengthens me!