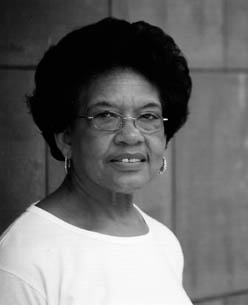 My name is Lucille Hill Williams. I am a wife, mother, grandmother, great grandmother and the fifth of nine children raised in South Carolina. I have lived and worked in New Haven for more than 40 years.

One evening in January 2000, while combing my hair, I felt a sensitive spot on the back of my head just above my left ear. The next morning, I noticed a lump about the size of a small egg right under my jawbone. At first, I didn’t think too much about it and I went on with my daily routine. When I arrived at work, I showed the lump to a friend. We concluded that it was probably just a swollen gland. However, a few hours later two more popped up on my neck. I went back to my friend and we decided it was time for me to see a doctor. The doctor recommended that I have a biopsy. All this happened on a Friday, so I had to wait until Monday, 72 hours later, to be told I had cancer – non Hodgkin’s Lymphoma.

Of course, I was initially shocked. But it only took me a few seconds to put my thoughts together and decide to put my faith in God and my physicians. I would fight back and be a survivor.

I had six rounds of chemotherapy. During my treatment, I felt well every day. I added fresh fruit and vegetable juices to my diet and often walked home from the hospital. It took only four months for my cancer to go into remission.

After successfully completing chemotherapy treatment, I decided to retire. Now, I start my days with four to five mile walks. My time is filled with volunteer activities, bible classes, my flower garden, travel, and spending quality time with my great grandson.

It’s been over two years since I have been cancer free. I thank God, my doctors, family and friends for their continued love and support.