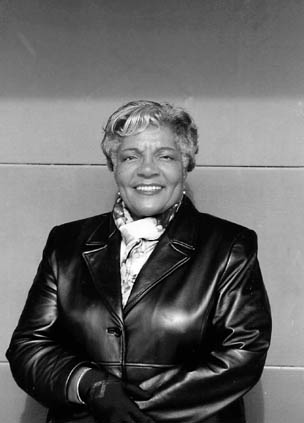 I live in Branford with my husband, Edward. We have two adult children Karen and Kevin Mapp. They live in Roxbury, Massachusetts and Oakland, California, respectively. In January 1995, I discovered a lump close to the areola of my right breast. Hoping I was wrong, I carefully checked again. There was no mistake. Stunned and feeling a chill, I resolved that I would not panic, that I would maintain calm and, finally, that I would not discuss my discovery with anyone until I checked further. I did not want my family or my friends to be frightened or worried about my welfare.

Within a few days, I had a mammogram, which clearly indicated a growth that was about two centimeters in size. After being examined and consulted by my ob-gyn and a highly recommended surgeon, I underwent a stereotactic biopsy. As I had feared, the results were negative. The tumor was malignant and was to be excised by a lumpectomy and axillary node dissection. The diagnosis was adenocarcinoma. At that time, I tearfully advised my husband and children about everything, including my impending operation. Though alarmed and terribly dismayed, they rallied around me, giving me their unending love and support. Relieved, I felt as if a great weight had been lifted from my shoulders. Fortified by prayer, as well as, my strong belief that God, in His mercy, would guide the surgeon’s hands.

The operation took place on March 10, 1995 at Yale New Haven Hospital wherein a 2.5 centimeter tumor was excised. In addition, ten nodes were removed and all were found to be clear of cancer. Thanks be to God! Soon after, I was referred to the Father Michael J. McGivney Cancer Center at the Hospital of Saint Raphael where I underwent seven weeks of radiation therapy. I had also been prescribed the drug, Tamoxifen, as a preventive measure against any recurrence of malignancy.

I have been cancer free for nearly six years and gratefully give thanks to God for His mercy. I am also proud to be a cancer survivor and, therefore, faithfully maintain a schedule of self-breast exams, bi-annual check ups by my surgeon, and an annual mammogram. Although I contracted Lymphodema (swelling) of my right arm, I consider myself lucky to be alive. Life can indeed be beautiful, and I do stop and smell the roses.