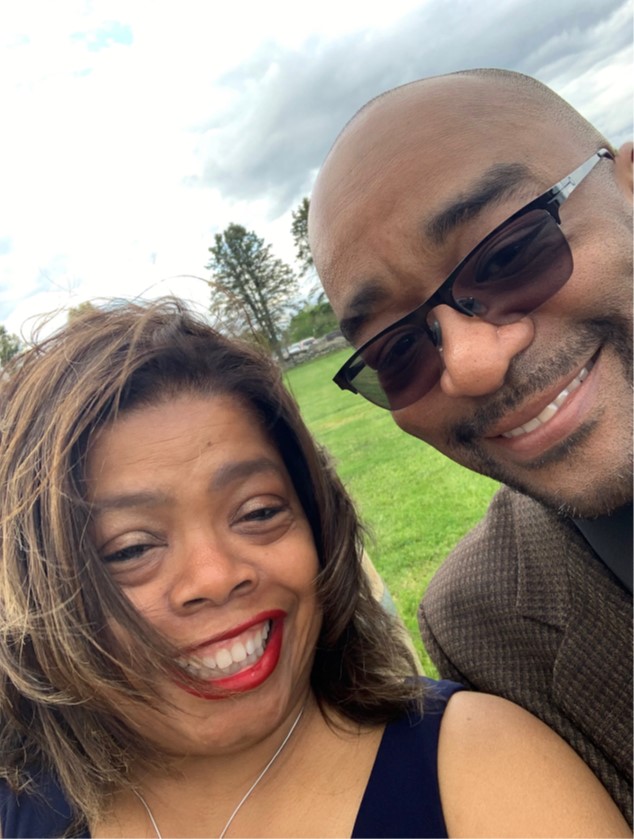 to my routine mammogram appointment, talking to my older brother. He
asked where I was going, and I told him. He said, “What’s wrong”? “Nothing, just a routine mammogram,” I replied. Little did I know that this
day, at age 46, would change my life forever.

On that bright sunny March day, I became Number 8. The doctor came in, looked at my mammogram and said, “You have breast cancer” –
as bold and direct as that! I remember the nurse trying to ease his blow, but the blow had landed hard. A mass was found under my right armpit.

On March 29, I met with a surgeon, Dr. Sayer. He performed a core biopsy and needle aspiration. Results: abnormal cells and benign breast tissue. Surgery was scheduled for a lumpectomy on April 7. Cancer was found in the sentinel node – positive for invasive ductal carcinoma. There was no mass noted in the breast. Unfortunately, my diagnosis was not so clear-cut. Following an MRI and CT scan, my tumor markers and histopathology were
“highly suggestive of thyroid cancer and secondary for lung cancer.”

I had what they diagnosed as an unknown primary. A PET scan on April 20 revealed nothing new other than what was noted on the MRI. Dr. Sayer suggested I go for a second opinion. My journey then took me to the Smilow Center at Yale.

On April 23 I met the oncologist, Dr. Abu-Khalaf, who would work tirelessly to find the source of my cancer. Through countless tests (biopsies, neck and full body CAT scans, pelvic ultrasound, and MRIs) they found a 2mm ductal carcinoma in my right breast. The nurses, who I got to know pretty well, actually cheered when it was found. After a long three months, I was able to say, “I have breast cancer.”

On June 7, the day before my 47th birthday, I began chemotherapy. Ironically, because I was in “good health,” I was judged able to tolerate a cocktail of ACT (Adriamycin, Cytoxan and Taxol). I received eight rounds of chemotherapy that ended on September 13, and on October 21, I had surgery to conduct a double mastectomy. I have been blessed with great fortune, so this was not my journey to travel alone. My husband Reinhard said, “If I could change places with you, I’d do it in a heartbeat.” He 2 was my rock throughout this journey. He also kept EVERYONE notified of everything, every step of the way through his emails – it was our journey.

My sons, Reinhard II and Harrison, shaved their heads with me and kept things as normal as possible throughout the battle – it was our journey.

For my twin sister Ramona, who traveled the road with me daily and who was there for the last chemo through the tears we shared when it ended – it was our journey.

For my nieces and nephews who checked in with me constantly, for those who traveled to Connecticut because they had to see for themselves that I was doing ok, and for the amazing brother-in law who brought them and prayed for me daily and spoke to me before every appointment (and still does) – it was our journey.

For the Lincoln family who was constant throughout, offering their beach house as a get away, who took our son to driving school and later to his road test when we couldn’t, and for providing strong support for our entire family – it was our journey.

For Sue, who gave me a bracelet when I was diagnosed, one that had been given to her when she was diagnosed – it was our journey. I later gave that bracelet to someone else who was diagnosed.

For the numerous friends and coworkers who organized meals for my family, and who called me daily; for those who helped me before, during, and after when, after nerve damage made it difficult to even make my bed – it was our journey. And for Patti Z from whom I received a card in the mail after every treatment, helping to count down the chemo with me – it was our journey.

For Marie, who traveled this journey in a way only we can possibly understand, and who nominated me for this honor – it was our journey.

Suffice to say, I did not travel this journey alone. Although I had to go through the physical and emotional changes/challenges, I had so many people who lifted me up daily and were by my side. Without those people I would not be able to celebrate 10 years being cancer free.