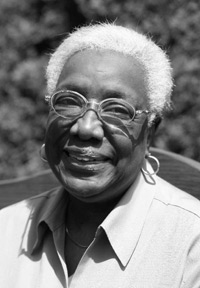 In May 2009, I was cleaning my house and moving and lifting furniture around from side to side. I leaned over to pick up a pail and felt a sharp pain. I could not move for five minutes. I just stood there holding the pail. After the pain went away, I continued my work and the other ordinary chores that I was doing. The pain never returned.

In June of 2009, I felt a lump in my breast above the chest area. I walk every day as part of my daily exercise routine. When I showered afterward, sometimes the lump was there and other times I felt nothing.

During the latter part of June I was taking a bath and, after I got out of the tub, was drying myself off and getting ready for church when I saw the lump again and also felt it. I got up and got a piece of tape, put it on the spot and went to my medical doctor to be examined.

At first he could not feel it but suggested that I have a mammogram; and I suggested that I have an ultrasound as well. On July 8, 2009, I had both tests. The mammogram was normal as it always had been; however, the ultrasound showed that something was there but they didn’t know what it was. On the next day, July 9, 2009, they performed a biopsy. On July 16, 2009, the results showed that it was cancer.

My first appointment with the cancer doctor was July 23, 2009. My journey began with a CT scan, MRI, bone scan and biopsy, all leading up to having a lumpectomy on September 16, 2009 followed by radiation and chemotherapy.

Because of the history of cancer in my family, I cannot tell you that I was not afraid; but I had an inner peace and I just wanted to get it over with.

Living from my faith, I know that God is with me. I have been blessed through all my treatments of chemotherapy and radiation. I thank God for the doctors, the surgeon, and all of the staff at the Yale Cancer Center.