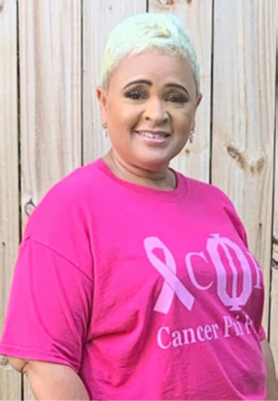 you do have breast cancer.” Those are the frightening words I heard 20 years ago when my life was changed forever. I was just 28-years-old and I had a 2-year-old and a 3-month-old. I thought that the doctor had given me a death sentence.

I discovered a lump on my left breast when I was three months pregnant with my second child. Since there was no history of cancer in my family, they considered it to be a swollen milk duct. “Not to worry,” is what I was told, so I didn’t. A week or two after the birth of my daughter, the lump seemed to have quadrupled in size like it had been fed. I was then sent to have a mammogram. The mass appeared too well-defined to be cancerous and when they aspirated the area there were no cancer cells found, so I opted to have a lumpectomy because it was so large.

On July 7,, 2001, it was supposed to be a simple procedure, but that is when my world was turned upside down. Cancer usually grows outward but mine grew on top of each other which gave it a defined look and was the size of a softball. When they had previously aspirated the area, they didn’t go down far enough to where the cancer cells were. But after examining the tissue in the lumpectomy, cancer cells were found. Two weeks later I was having a radical mastectomy. The whole breast was removed with 11 lymph nodes. One lymph node tested positive for cancer. I now suffer from Lymphedema in my left arm, and I am left-handed. I endured six months of chemotherapy, which I hated with a passion! After the first treatment I knew that I was fighting for my life! I survived the chemo and when you make it through that ordeal you feel like you can survive anything!

After completing chemo my neck started to hurt and the pain intensified. I started running a fever. I couldn’t get the fever to break so my husband took me to the emergency room. The portacath that was put into my chest to receive chemotherapy had caused a blood clot and an infection in my neck. I had to have emergency surgery to have it removed and I was hospitalized for a week. After healing from that
I had to complete six weeks of radiation. Six months later I had a breast reduction on my right breast because I was going to have a procedure on my left side and wanted to be balanced in size. I did not want an implant, so I had a Latissimus Flap procedure done.

Fast forward to 2008. I had a mammogram on my right breast. I received one of those letters in the mail stating that I had an abnormal
mammogram. My heart dropped and I was like, “No, not again!” After having an ultrasound, I was told that it looked like a shadow and that it was very small and that they would keep an eye on it. I decided to get a second opinion, so I was sent to Chapel Hill. I ended up having a mastectomy and the Latissimus Flap procedure at the same time. I was hospitalized for two weeks and I got out
Thanksgiving Day.

That is my story, my testimony and my truth. God put me through some storms but he saw me through. I have always wanted to do something other than sharing my story to help other breast cancer survivors. I want to uplift, encourage and inspire other cancer survivors. I am not part of a sorority, but I am part of an organization that many others are a part of as well. I had a vision and I shared my vision with one of my daughter’s friends who is into graphic design and digital marketing, Giannacreazione. She helped me create a page on Facebook called Cancer Phi Free. I post inspirational quotes as well as videos. My goal is to make this become a movement. I also have a nonprofit cancerphifree.org. I don’t want to just include cancer survivors. I also want to include the caregivers. Caregivers have such a crucial role and when the caregivers are taking care of the patients, who is taking care of the caregivers? One of my videos is dedicated to caregivers.

I am a double mastectomy survivor, but that doesn’t define who I am. I am more than what breast cancer tried to take away from me. I have my scars to remind me every day of what I went through. I am still here because God saw fit to keep me here. Check out my Facebook page, Cancer Phi Free. You can e-mail me at Cancerphifree19@gmail.com. I am married to my college sweetheart Michael, who was my caregiver, and have two beautiful daughters, Mikayla and Myka, who were my inspirations to fight and to live.