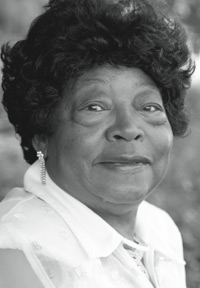 I was diagnosed with Breast Cancer in 1991. At the time I was working at Winchester Repeating Arms.

One day while taking a shower, I discovered a lump. The lump seemed to get larger, so I made an appointment with my General Practitioner.

In the meantime, my sister recommended that I see a surgeon at the Temple Medical Center. After examining me, the surgeon, who was a woman, performed a needle biopsy that revealed that I indeed did have breast cancer. I was immediately scheduled for a mastectomy. Following this surgery I began a course of chemotherapy with Dr. Levy who is an oncologist.

I have seven children, four daughters and three sons. During my recovery, I had lots of love and support from my family and friends. It was not easy; but I believe my faith in God is what got me through that very difficult period.

Since my recovery I have attended various breast cancer support groups. The first one was at the Jewish Community Center in Woodbridge. Then I learned about Sisters’ Journey and attended several of their meetings. I have also participated in workshops sponsored by the Yale School of Nursing.

I was born in North Carolina and moved to Connecticut at the age of nine.

Since 1948, I have been a member of Pitts Chapel. Currently, I am on the Mothers’ Board and over the years have served on several committees at my church.

Through God all things are possible.